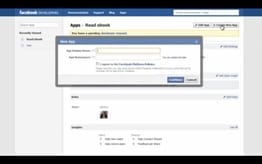 Please note this video tutorial was made for people who wanted very early access to the Facebook Timeline. This is now out-of-date and you can update your profile by simply going to http://www.facebook.com/about/timeline and clicking the green get timeline button at the bottom of the screen.

An easy to follow, step-by-step tutorial on how to set up the Facebook Timeline in only a few minutes. This is one of a number of Facebook video tutorials and Facebook How To guides that we will be creating in order to help social media users and business professionals to make the most of Facebook profiles, pages, groups and features.   This video tutorial provides some useful tips on the new Facebook changes being rolled out on October 13th 2011 and how to get Facebook’s new Timeline layout NOW. You don’t need any programming experience or technical ability whatsoever! Please leave your comments below : )

Hi there, guys. So now that youve seen the new look of Facebook and youve seen the Timeline and the kind of layout now, what I want to do is I want to get on you on there early so I’m going to show you a step by step guide now, real briefly, on how to do that. So first of all you want to go up to the top to the Search Bar, and type in “Developer”, okay, and hit “Enter”, okay. Now it will load up this page. Now this page, you want to go across to the right, and what we’re going to do, we’re going to create an app, and that’s going to bring up this section. Now it says “App Display Name” so we’re just going to create a name. Now this isnt going to be displayed anywhere so it really doesn’t matter what the name is, but I would suggest putting a verb in and putting some sort of noun to describe what it is, and what it’s going to be doing. So I’m just going to put “Read ebook”, nice and simple, and the “App Name Space,” which is basically where the canvass is going to be displayed, so I’m just going to put “Read ebook page”. Okay. And over here it says it’s available, and I’m going to click “I agree” to the Facebook platform policies, and click “Continue”. And of course, it’s going to ask me for a “Capture”, okay, and I want to hit “Submit”. Now here to the left, on the left hand page, where it says “Open Graph,” that’s really what we’re going to concern ourselves with, so we’ll click on that. And it says here, “Get started with open graph.” Now all we need to do, it says “Start by defining one action and one object for your app.” So what is this app going to do? Now we just want to look at it, so I’m just going to put “Read”, I just want to read it, and the app is going to show, let’s say, “Book”, and we’re going to hit the “Get Started” button. Okay, now this section, I’m just going to want to scroll all the way to the bottom, because we’re not concerning ourselves with actually developing anything in particular. This section is really if you are a developer and you’re developing a specific type of app, but we just want to view the new Timeline in Facebook. So at the bottom we’re going to go, “Save Changes” and “Next” and we’re going to want to go down to the bottom again, and “Save” and “Finish.” Now as soon as you hit “Save” and “Finish” that’s you done. So that is it. It’s completely done. Now what you’re going to want to do after that is go up to the top here, the Address Bar, and just put in Facebook, okay, Facebook.com, click “Okay”. And if you just scan over here to the left, next to your Thumbnail, where it says your name, you just want to click on that and voila!. There were are! I want to thank you ever so much and I hope you enjoy the new Facebook Timeline.